If you’re friends with me on Twitter, Facebook or just know me in person, you’ll know that I recently bought myself a shiny new 27″ iMac. Yep, I finally took the plunge! I’ve been so fed up with Windows 7 of late I decided to give it the flick altogether.

Just over two years ago now I wrote a post giving 13 Reasons Why Vista Is Crap. In it I mentioned that I couldn’t wait for Windows 7 to be officially released later that year, and at the time, I couldn’t! Vista really is the biggest piece of shit out there! Well, after running Windows 7 for almost 2 years, I’m ready to kick this OS to the curb as well. It’s definitely nowhere near as bad as Vista, but it’s still crap.

So what wrong with Windows 7?

Well, for starters, it’s memory management sucks ass. I’m talkin’ serious suckage! I got so sick of applications constantly displaying “Not Responding” whenever you had more than one app open! God forbid you have multiple apps running in a multitasking Operating System! 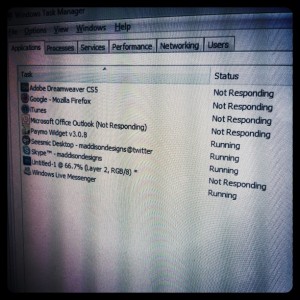 Both Vista and Windows 7 run SuperFetch technology. It basically fills up your RAM with what it thinks you’ll need. This is why, if you look in Task Manager on the Performance tab, you’ll see your Free memory usually sitting around the low teens or single digits. Personally, I don’t think it does a very good job of working out what I want running. In previous OS’s such as XP, it simply loaded the application into memory when requested and dumped it when finished. WinXP would occasionally freeze for a second or two but nowhere near as often as Vista or Windows 7.

Other things on my long list of annoyances are…

Icons in the System Tray constantly disappear, even when they’re set to “Display all the time”. This is really frustrating when you have an application running and the only way to bring it into view is by clicking on the System Tracy icon!

Device drivers constantly reinstall. I would plug my iPhone into the same cable, which in turn is plugged into the same USB port, everyday. I can’t tell you how many times Windows would popup a message saying “Installing device driver”. Aaargh! FFS! It’s the same fkn device I had plugged in yesterday! And, if you dared change the device to use another USB port, well… you’d definitely get the “Installing device driver” message then!

Network drives would constantly disappear. Up until recently I was running a Windows Server on a standalone PC as a development web server. It was never turned off and sits on the same subnet on my network yet somehow Windows 7 would just occasionally forget about it and I couldn’t access my development files.

Devices plugged into USB Hubs would frequently not work after booting up. At least a couple times a week I would have to unplug my Wacom tablet and plug it back in just so Windows would see it after booting up in the morning. I even had a batch file in my Startup Folder that would Stop and Restart the Tablet drivers as suggested by Microsoft Australia.

Windows would constantly lock files and folders even when they’re not being used. I’ve lost count how many times Windows told me that I can’t delete a folder because it says it’s “in use”, even when there are no files open in any application. So many times I would have to close down Windows Explorer and then reopen it before it would let me delete a folder.

And do I even need to mention how slow it is to boot up!? Yeah, the desktop and icons display within a couple of minutes, but big woop! The hard drive is still beating itself to death and you can’t start any applications because the system is still loading all it’s files and drivers.

Are Mac’s really that good?

As much as some of the Apple Fanboys will tell you otherwise, Mac’s aren’t perfect. I ordered my new iMac online and after having it for only 3 days, it got sent back as it was having problems. It wouldn’t wake from sleep. The only way to power it up was to physically unplug the power cord, wait a few seconds and then plug it back in and turn it on. After making an appointment at my local Apple Genius Bar, they recommended that I return it for a refund and then order a new one from them. Several weeks later, here I am am with my brand new iMac. One of the truly great things about Apple products though is their support. It really is second to none!

Technically, my PC was quite powerful. It was running an Intel Quad Core i7 @ 2.6Ghz. My new iMac is also running an Intel Quad Core i7. It’s obviously a newer generation chip and it’s also running slightly faster @ 3.4Ghz. The speed difference between the two is amazing though. No longer am I sitting, waiting for an application to start loading. I’ll click on an app and a couple of seconds later it’s up & running. I really do feel a lot more productive as I’m not waiting for the OS all the time, like I was in Windows.

I’ve found with the majority of the Mac applications I’ve run that they never seem to have as many options or preferences as Window applications. This has it’s pros and cons. Too many options can make applications confusing but too few, obviously means sometimes there’s “features” or settings that can’t be changed or are missing.

Apple hardware tends to be a bit pickier when it comes to accessories. On a PC you can plug pretty much any device in and it’ll work. Not so on a Mac. I’ve got a USB hub and an external drive, both of with worked fine on my PC but have problems on the Mac.

One of the things that I find really annoying is the Apple Finder application. It’s basically Apples equivalent to the Windows Explorer app. Within Windows Explorer, say you’re copying a series of folders and files from one location to another, if the destination location has folders or files that have the same name as the ones you’re copying it gives you the option to “Move & Replace” the files/folders in the destination location or “Don’t Move” the files/folders, leaving the original intact. You can also have it keep both versions, whereby it will rename the file(s) your copying by appending a number on the end (eg. mydoc (2).txt). If you’re moving a lot of files, you can apply your selection to “all files” in the case of multiple duplicates. Using the Apple finder application, when you’re copying files and it finds duplicates, the only options you’re given are to replace the duplicate files, keep both files (by renaming one) or stop, which cancels the copy. What’s worse is that if you are copying folders, then the “Replace” command will do just that. It won’t merge the files you’re copying with the target location, it will actually remove the target location and replace it with the folder you’re copying. What this means is that if there are files in the target location that are different from the ones you’re copying, they’ll actually get deleted since the whole folder is replaced! That’s ridiculous! I can see it being quite easy to lose files when you’re using the Finder app to move files and folders around.

There are obviously lots of other little differences between a PC and a Mac, which you’d expect, but most of it just comes down to getting used to how it works. The Home & End keys are a good example. Within Windows, pressing the Home key will place the cursor at the beginning of the current line and pressing End will put the cursor at the end of the line. On a Mac, pressing Home will place the cursor at the beginning of the application and End will place it at the end. So, if you’re writing up a document for example, pressing Home takes you to the beginning of the document and pressing End will take you to the end of the document. This I don’t think I could ever get used to and thankfully I found a cool little app called DoubleCommand that allows me to easily remap these two keys so they work the way I’m used to.

You’ll quite often hear Apple users boast they they don’t need to run anti-virus software like you do (or should) on a PC. This may be true but it’s not because Macs are immune to getting viruses or malware. What a lot of Apple folk don’t seem to realise is that the main reason that they don’t need anti-virus is because the majority of viruses are developed for Windows based PC’s. A-holes who write viruses aim to do as much harm to as many people as they can and since Window PC’s have the greater market share, this is who they target. If this market share ever starts to even out, I’m sure you’ll see viruses targeted for Macs.

So what’s the verdict?

Overall, I love my new iMac. It’s extremely fast and responsive and the new version of their Operating System, OSX Lion, has some really great features and, with all the touch gestures, really is a joy to use. The display is amazingly crisp and vibrant and being a 27″ iMac, is HUGE!

It will be interesting to compare  Microsofts implementation of gesture control when they officially release Windows 8. I doubt they’ve put as much time and effort into perfecting them as Apple have. I think Apple have successfully integrated their iOS gestures into a desktop Operating System. From all the videos I’ve watched regarding Windows 8, Microsoft seem to be more concerned with making their OS work on tablets and seem to be forgetting about all the people who’ll actually be using a desktop with a keyboard and mouse.

Have you switched from using a PC to using a Mac? Leave a comment and let me know, I’d love to hear how your experience was. 🙂

10 responses on “Why I switched from PC to Mac”

Proudly powered by WordPress, of course.